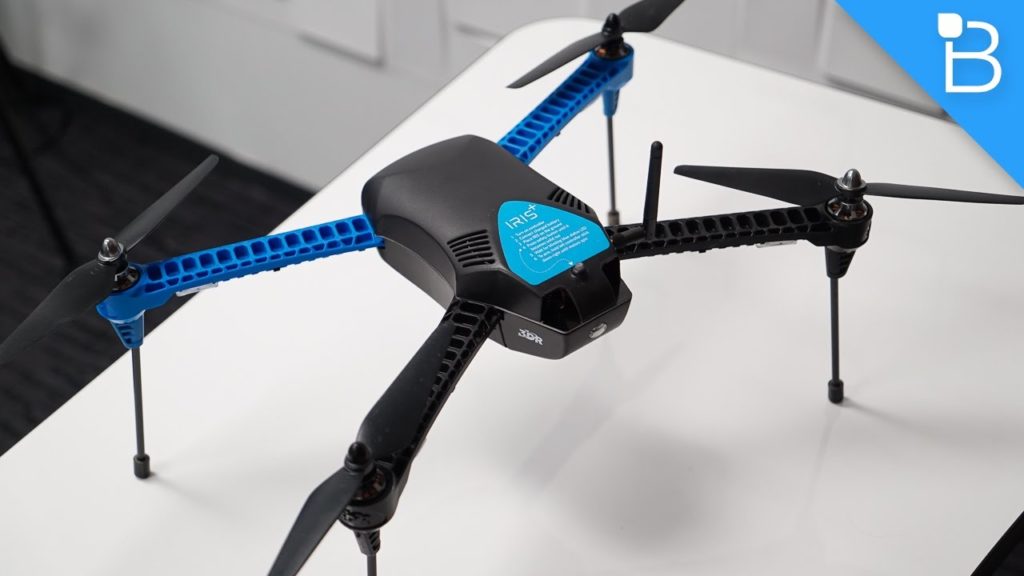 If you are currently on the market for a new drone, let us start out by telling you that it is important to understand that no machine out there is perfect  – this is something you must recognize. Regardless, there are going to be both pros and cons, but that doesn’t mean you cannot get something that is close to perfect! In terms of drones, one that really stands out from the crowd right now is the 3d Robotics
Iris+.

What is the 3D Robotics Iris?

Everything about this drone is intimidating – you have its angular lines of beauty, large footprint and big remote control are only part of the blame. As soon as you open up the box, the drone will be ready to fly. However, if you would like to record video while you’re using the drone, you’ll need to invest in a gimbal as well as a GoPro Hero – if you don’t mind not being able to record while the drone is flying, then the camera isn’t needed.

Looking at the Iris+, as we stated, it is very intimidating. When you first glance at it, you might think it was a big, mechanical insect. It has a curved body with four struts – two black and two blue – that extend from the corners. Each strut houses a motor that is responsible for driving a propeller.  As far as the wingspan runs, it’s pretty big – measuring 21.7 inches from motor to motor on the diagonal. The body is about four inches in height, and if you include the gear, it’ll add around four inches.

The Iris+ isn’t the easiest thing to carry around, but to help out, 3d Robotics offers a nice carrying case. It’s big (24.5 x 19.5 x 12 inches) and heavy (19.75) pounds, but it will keep the drone safe as it’s well-padded. It has precut foam insert for the drone itself as well as the accessories.  The carrying case has both wheels and a handle.

You may have some complications when it comes to connecting the battery to the Iris+, because it’s a bit tricky.  While some have a battery compartment that slides in, this one right here will require you to open a rear hinge, then slide the battery in and connect an electrical cable to it. This will automatically power the drone, but don’t worry because as long as you have safety mode set, the rotors won’t turn during this time. When it comes time to disable the safety mode, simply press the flashing red button that is located at the rear of the chassis.  When it’s possible to power up the engines and prepare for takeoff, there will be an audible beep.

The remote is large and size and is full of dials and switches. It even includes a nice LCD menu system. You don’t need to worry about all of the controls – just focus on the main ones, which includes the dial to toggle switches, the two control sticks and the power switch.

The Iris+ is capable of flying autonomously, which is good news. You can program the route through a Droid Planner App for android – at this time, iOS isn’t supported – the app is easy to use. The data will transmit to the drone through the antenna.

Overall, at the end of the day, the 3d Robotics Iris+ is a solid drone. If you’re currently on the market for a new drone, with its sleek design and interesting controls, this one right here might be a viable option for you.

newdronecenter.com is a participant in the Amazon Services LLC Associates Program, an affiliate advertising program designed to provide a means for sites to earn advertising fees by advertising and linking to (“newdronecenter.com” amazon.com, or endless.com, MYHABIT.com, SmallParts.com, or AmazonWireless.com)