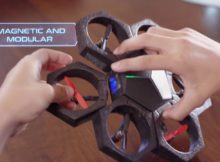 If you’re looking for a drone that is making a splash, then look no further than the Airblock Drone. You see, there’s a reason we say this …the Airblock drone is capable of flying through the air, then transforming itself into a hovercraft and gliding over solid ground or water. This is an educational drone that was developed by DIY robotics company Makeblock, which is based in San Francisco.

What is the Airblock Drone?

The Airblock Drone has been designed to “encourage the spirit of creating” and is capable of transforming like magic from drone to a hovercraft, and then back into a drone again. It’s magnetic and its modular parts are easy to put together, then take apart without using any tools. The parts are made of engineered plastic foam, so it is safe to fly indoors and out and is crash-friendly.

Once you have assembled the Airblock Drone, you will be able to control it via Bluetooth using the Makeblock app for both Android and iOS. Not only is this drone fun, but it is also educational and can teach children about aerodynamics and coding. For example, you can drag and drop maneuvers that have been pre-programmed within the app in order to make the drone come to life – you can combine different commands in order to design your own special aerial stunts.

The two main vehicles you can build include the hovercraft and the regular flying drone. However, it’s possible for you to take the parts and put together other DIY projects. For example, you can use the pieces in order to power a Lego car, which we personally found pretty cool. From there, you can set about programming the durable blocks via the easy-to-use app that we told you about.  The visual programming language can convey the essence of coding, but instead of using text, it uses graphics, making the entire process easier.

The AirBlock drone has a flight time of six minutes, which is a downfall. However, you can increase the time by carrying additional batteries with you.

This drone has a maximum speed of around 1.5 meters per second. In hovercraft mode, it can hover with a speed of 2.5 m/s.

Okay, so we know that the ideas nesting behind Airblock have been done before – it is nothing new. However, the combination in a single product makes it unique. The drone has one main module that operates as the programmable core.

In the package, you will have a total of six blade modules – you can combine thee modules in any way you like – each way gives different effects. There’s even a pretty cool hovercraft base that will allow you to turn the drone pieces into, as we said before, a hovercraft.

The modules are decent as they magnetically latch on to one another – this makes it easy for the user to attach and detach the parts, without requiring any dangerous tools. Yes, that means it is safe for children to use. It reminds us of putting custom Lego parts together.

The Airblock Drone is perfect for both adults and children as it is educational in so many different ways. The ability to transform it from a drone into a hovercraft makes the product even more desirable and is well worth every penny.