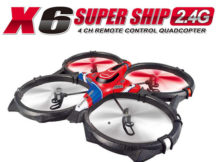 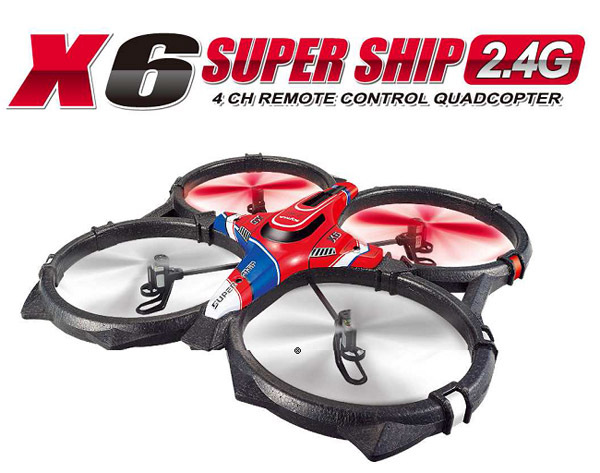 Certainly one of the most advanced commercially available quadcopter designs out there today, the Syma X6 Supership looks like it would command a price point significantly higher than the $70 or so that it asks – and honestly, it’s probably worth at least twice as much.

Not only does that make this particular quadcopter a fantastic bargain, but it also gives you the opportunity to get your hands on advanced quadcopter technology for a fraction of the price – helping you learn on a very accomplished platform so that you don’t feel uncomfortable when you decide to spend significantly more later down the line on a “beefier” option.

Built on the back of a reliable and consistently performing quadcopter design, this entry-level option takes advantage of the technology, intelligent stabilizers, and a very modular design that helps it avoid self-destruction should it land unintentionally.

The odds are very, very good that you’re going to fall in love with absolutely everything about the Syma X6 Supership!

As we just touched upon, the Syma X6 Supership takes advantage of a modular design to help make it a lot easier to transport to your “launchpad” – but also helps to contain damage to one specific area of the quadcopter should it come into contact during a midair collision or land unintentionally.

Believe it or not, those two things are going to happen A LOT when you dive headfirst into the world of quadcopters. You want to be 100% sure that your new drone can not only take the beating and still operate just as effectively as it did on day one, but that it’s going to be easy to repair or replace should the damage be more widespread or more significant than anticipated.
The Syma X6 Supership holds up well across the board!

This particular quadcopter has also been designed as a “stunt and tumbling” model, giving you the chance to do a lot more than just hover above your neighborhood. Thanks to its design, it’s going to be able to rip right through aerial maneuvers that other quadcopters would have panicked or stalled out during – meaning the sky is quite literally the limit when it comes to interesting adventures you’ll have in the air with this drone!

A six axis gyroscope stabilizer also helps as far as stability in the air is concerned, giving you the chance to learn how to command and control your new drone on the fly. The gyroscope will do absolutely everything it can to keep your quadcopter balanced and stable in the air, even if you get a little bit jerky on the stick when handling the remote control.

The lithium-ion battery system (rechargeable battery system, at that) is going to give you up to 15 minutes of flying time on a full charge, significantly more flying time than you’ll get out of most other options. Sure, it’s going to take about an hour to charge up that battery from completely empty, but that’s nothing compared to most others as well.

You’ll have “3-D Full Flight Control” when you pilot the Syma X6 Supership as well, which means you’ll be able to go up, down, left, right, forward, backward, and pretty much anywhere else you’d like just by manipulating the controls running off of the 2.4 GHz wireless transmission technology.

The only real downside to moving forward with this particular drone is that it takes about an hour to charge from a completely dead battery, but even that isn’t that big of a deal compared to most of the other options out there. Buy a second battery pack (or even three or four, they aren’t that expensive) and you can stay up in the air almost permanently – coming down only to “refuel”.

It’s going to blow you away!