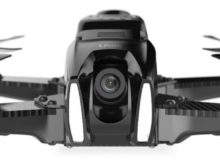 You might be into your DJI Phantom or whatever type of drone you currently have, but you haven’t experienced real fun until you have flown a racing drone. Seriously, a racing drone is going to take you to a whole new level. While most drones are programmed to take pictures and make flying easy, they lack the speed and agility. If you really want to hang with the pros with a fast drone, then you need to step outside and get your hands dirty. That is where the UVify Draco comes into play.

What is the UVify Draco?

The UVify Draco is a racing drone that is ready-to-go. With it, yes, you can hang out with the pros. The company designed the UVify from the ground up and as a bonus, it even looks smart – there are no wires or batteries exposed.

You’re not going to believe how fast this bad boy can go. This little quadcopter is capable of hitting a top speed of 100 miles per hour. If you’re familiar with those mainstream photography drones currently on the market, you probably realize that this blows them right out of the water with no questions asked.

The Draco has a modular design to it, so you can easily swap parts out in order to upgrade, if you like. Plus, this is a major benefit because if a collision happens, your drone didn’t go completely down the drain. So, if you ding your drone while you’re outside flying, you’re not going to pick up a solder iron or anything like that – the parts are easy to replace. If you break a motor or an arm, you can clip a new one back in place and you will be good to fly again.

When Draco is released, the cost is going to be around $499 (that is an estimate) and that does not include a transmitter/controller. The new motor arms would be around $30, which isn’t all that bad. No, the drone isn’t exactly cheap, but on the same note, it’s not that big of a sum either. With the carbon-fiber frame, you can rest with the satisfaction of knowing that the drone is built pretty solid, so breakages probably won’t be too common, as long as you use some common sense when you’re up in the sky.
The Battery Life

Unfortunately, the battery life with the drone is a bit of a downfall, but when something has this much power, that is expected. The battery will only last ten minutes on one charge and if you’re operating at top speeds, that number is going to drop down to two.

Thankfully though, you can swamp the battery out, so this is going to increase your time if you carry a second battery with you.

The Release Date for UVify Draco

Draco isn’t going to be available until next summer 2017, but if you’re interested in this drone, you can pre-order it as soon as today. There are a total of two models to choose from – you have the Draco and the Draco HD, with the latter having a better camera and real-time HD video streaming. If you enjoy photography, then we highly recommend the Draco HD.

If you’re currently on the market for a new drone and you want one that will really get your adrenaline flowing, then the UVify Draco would be the right route to take. Being able to reach speeds of 100 MPH is a must have for adrenaline junkies!