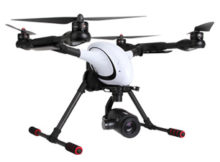 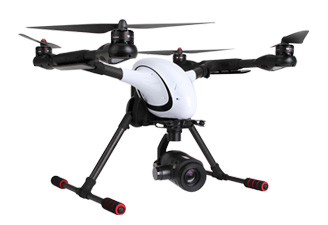 Walkera is a Chinese drone manufacturer that you may have heard of, especially if you have a knack for drones and enjoy reading about them.  This company has gained a pretty large name in the industry as they have been developing UAV’s for the past twelve years now and recently, they decide to release an update to their successful Voyager line – the Walkera Voyager 4. In the past couple of months, this drone has been making its way through the media because it is finally becoming available to US consumers.

Set at a competitive price of $3,000, this drone is obviously for advanced enthusiasts and professional use. So, we’re going to be honest with you right now, if you have never had a drone before, then this one wouldn’t be a good option for you.

When You First Look at the Drone

When you first look at the drone, you’ll see something that is well worth the money – it is elegantly crafted and the overall appearance is quite stunning. It has slim and sleek proportions with wings that are a bit higher up than the fuselage in an H-configuration.

There’s a spring loaded throttle stick, making it easy to hold altitude and modern car ignition buttons so that you can easily change function.

This camera is capable of recording in 1080p Full HD video and can rotate 360 degrees, which is a nice bonus. It is stabilized by a gimbal so that you won’t have to deal with blurry pictures.

Controlling the Drone from a Distance

Both the camera and the drone can be controlled from up to a mile away using a mobile app and the drone’s build-in Wi-Fi network.

The Walkera Voyager 4 offers an exciting 4G connectivity feature. This means that as long as a mobile network is available, it can be controlled at larger distances.

On each flight, you could easily spend 25 minutes – that includes both setting up and flying the drone. As for the actual flight time, it could last up to 20 minutes. The Mode 2 radio transmitter, throttle stick can be found on the left. It is spring-loaded in order to hold the altitude for each time you release the stick.

When you are sliding the battery into the quadcopter, you need to make sure you are holding  the hinge in order to lock down the battery. Before you take off, test the battery area in order to make sure it doesn’t slide back out. When you’re ready, lay the quadcopter on a hard surface and turn the power on the main battery. Afterwards, turn on the radio transmitter. This is going to give the quadcopter time to self-level the gyroscope. Next, you’ll see the red flashing light – wait for it to complete its binding and system self-checks.

Afterwards, you’ll notice blinking blue lights – that is an indicator of the number of satellites you have established to connect to. When the drone is ready to fly, switch it over to Manual Mode or GPS Mode (your choice). Hold both of the sticks inwards in order to arm the motors and the propellers will start to rotate slowly. The drone is now in flight preparation mode.

If you’re looking for a good drone and you don’t mind spending the extra money, then the Walkera Voyager 4 is well worth the price – it can even be used for professional use.