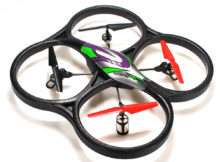 Quadcopters are quickly becoming one of those “must-have” toys, even for younger children, and though there are a lot of different options available on the market today, none of them are quite as “beginner friendly” than the WL Toys V262 Cyclone.

Specifically designed for first-time drone pilots, kids, and enthusiasts that don’t want to spend a lot of money on a drone that they might not use all that much – or a drone that they might end up crashing – this quadcopter takes advantage of very lightweight construction materials and a powerful lithium-ion battery system that makes it a dream to fly in almost any condition.

Incredibly inexpensive (especially compared to the rest of the “beginner’s market” competition), this is exactly the kind of drone that you’re going to want to be piloting around when you are just getting started.

The very first feature that we want to touch on that helps to separate the WL Toys V262 Cyclone from the rest of the pack as to be the inclusion of a full blown six axis gyroscope system. The inclusion of this gyroscope system is going to help you effortlessly pilot this drone in almost any outdoor weather condition (outside of gale force, of course) – but it also helps to make sure that jerky or some movements that are so common when you first start to pilot your quadcopter aren’t going to cause it to come tumbling out of the sky.

The 2.4 GHz radio command module also guarantees that you’ll be able to effortlessly – and almost instantly – command your new quadcopter all over the sky without any interference. Though it operates over the same radio frequency band that most older Wi-Fi networks do, it uses a secure channel and creates such a directional connection that you won’t have to worry about interference causing any issues while you’re up in the sky.

Lastly, because it is so lightweight (thanks to some of the construction materials that we’ll touch on in just a moment) and uses a lithium-ion battery pack you should be able to keep your WL Toys V262 Cyclone up in the sky for almost a half an hour on a single charge. There aren’t too terribly many other bargain-basement priced entry-level drones that offer this kind of capability.

Made out of the lightest weight materials possible (we’re talking about very lightweight rubbers, foam, and plastic), this drone is easy to command and control and can quickly recover from any and all “bumps” that might happen when you first begin to land it.

The lightweight materials are also going to help you avoid costly mistakes when you (inevitably) have to deal with a midair collision with a stationary object – something that happens to every first-time drone pilot out there.